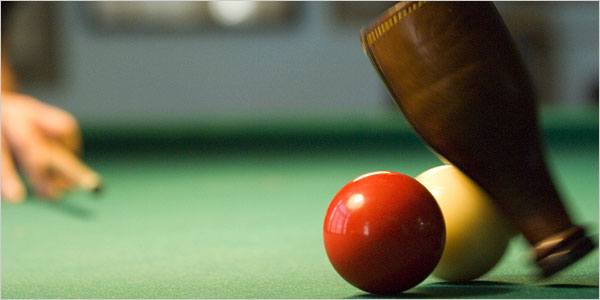 Playing pool is extremely exciting. But there is more to pool than the traditional billiard game. In fact, I urge you to try some other pool games that you probably have never tried. I assure you, you will enjoy pool and your pool table even more when you try bottle pool. Curiosity may have struck you already with just the name itself. So without further ado let me discuss to you what this “bottle pool” game is.

Shown in the photo is a set up for bottle pool where the “shake bottle” and two object balls are positioned in starting position.

What is Bottle Pool?

Also known as bottle-billiards, bottle pool is a hybrid billiards game which combines aspects of carom billiards and pocket billiards. It is often mistaken for Kelly pool, a game that is totally different from bottle pool. The game also uses the standard pool table although there are just two object balls a cue ball, and a 6¾ inch (171 mm) tall, narrow-necked bottle called a shake bottle or tally bottle. The shake bottle is often made out of leather and placed on the table as a target for caroms.

The origin of bottle pool is a little vague. Although tournament records and newspaper articles confirm that the game has been played since the 19th Century. A 64 player tournament to be played at a certain Hanover Clubhouse in Brooklyn was mentioned in an 1894 New York Times paper. The game became more popular during early to mid-20th Century.

This is an example of the traditional Tally bottle covered in leather. Photo courtesy of Wikipedia.

The player breaking starts with cue ball in hand from the kitchen (behind the head string). A legal break is called when there is contact with either of the two object balls.

The object of the game is to score exactly 31 points before any opponents, with a penalty for overshooting that benchmark. If a player overshoots the 31 benchmark, known as a “burst” in the game’s terminology, the amount exceeding 31 points becomes the player’s new score. For example, if a player has 30 points and then scores 2 points, the player’s score becomes one.

The scoring system may be combined making the highest possible score per turn 9 points. Once a player reaches exactly 31 points, he/she must announce the win for it to be official. If he/she fails to do so, he/she must wait for the next turn to do so. If someone else scores exactly 31 and announces it properly before the supposed winner’s turn, then that other player becomes the winner.

Just like with the regular game of billiards, a scratch entitles the next player to a ball-in-hand from the kitchen. Three consecutive fouls in bottle pool results in a loss. If the cue ball fails to touch an object ball, it is counted as a foul. While the cue ball coming in contact with the bottle first before hitting any of the object balls also counts as a foul.

This may seem a little over your head at first. But with familiarization and practice, you will realize how truly wonderful the game of bottle pool is. The best part in playing this game is that, there is more to it than just shooting balls into pockets. Bottle pool entails a little bit more strategy and a touch of math. I hope you get a chance to try the game and you enjoy it as much as I do.